Hi everyone
This is the first message of many that we plan to send monthly during our 18 month journey through Africa. We will send this to whoever is interested so if you know of any friends or relatives with e-mail who've been omitted from the mailing list, please give them our e-mail address.
We left Cape Town separately - Dave and Rushdi by train, Lance by plane - and met up at the end of May in Jo'burg. After sorting out visas and money matters we boarded the train North to Messina. After a scenic 12-hour ride through sparsely populated bushveld we alighted and hitched a ride to Beitbridge, the border with Zimbabwe. The lady who gave us the ride exclaimed on hearing our planned trip "you guys must be from Cape Town. Only Capetonians would do something this crazy!" 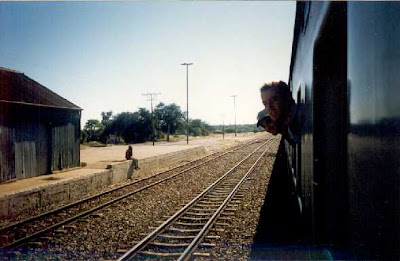 Train to Musina, South Africa
As we crossed the bridge over the Limpopo River we tossed our frisbee wondering what all we would experience before we set foot again on our motherland many years from now.
After completing the necessary administrative formalities, we entered Zimbabwe where we were immediately befriended by an official intrigued by the frisbee. So taken was he by us and our flying saucer that he introduced us to the truck drivers in the compound he monitored and organised that we got a free ride to Harare. Well, not entirely free. The hard-core Afrikaans drivers demanded that we buy a crate of beers and, after we had done so, ordered us to drink the lot! Obviously this posed a religious predicament for Rushdi, so we had to cover for him, getting completely plastered in the process. After an action packed 12-hour journey through the night we arrived in Harare where we promptly and erroneously caught a bus to Kariba. After discovering that we had been misinformed, we got off at the turn-off to Chirundu, where we were supposed to be going.
After waiting by the side of the road, trying unsuccessfully to hitch a ride, we got out the frisbee and began tossing it around. No sooner had we done so when a pickup (bakkie) did a U-turn and gave us a high speed ride all the way into Zambia, to the capital Lusaka.
There we stayed at the Sikh Temple, a haven of peace in this big, bad, crime-infested city. The temple was run by an old woman, Mrs Vridi, who takes in all travellers for free for three days at most. Although she couldn't speak a word of English, she was kind and helpful and took us into the kitchly decorated temple where we were able to watch as she prayed.
The next day we caught the bus to Kitwe from the infamous Lusaka bus station: the site of many an armed robbery/kidnapping and equipped with toilets too disgusting to describe.
After 7 hours we finally reached the green copperbelt town of Kitwe where we stayed with Rushdi's business clients in their lovely home.
Lance has had the freak misfortune of coming down with chickenpox so we were forced to stay in Kitwe for a week until he was no longer contagious. Dave and Rushdi decided to check out nearby Zaire (or, more correctly, the Democratic Republic of Congo) for two days.
After travelling on various busses and taxis we reached Zaire's main southern city, Lubumbashi. Situated next to the biggest copper mine we've ever seen (the mine dump made those in Jo'burg seem like ant hills), Lubumbashi's former glory can be seen in the crumbling remains of its French architecture. The atmosphere, though, was very much alive and vibrant with the scent of revolution in the air after Kabila's recent dramatic rise to power. Within months of his victory, traffic lights were installed, the banks were up and running and corruption at the border appeared to have been eliminated. After a day and a night in Lubumbashi, we returned to Kitwe to find Lance recovered and ready for the next leg of the journey.
We say a sad goodbye to Rushdi tomorrow and then it's off to Malawi where we hope to spend a couple of days lazing by its beautiful lake.
2 July 1997
Hi All
We're glad to report that we have emerged unscathed from the internet abyss. During our absence we have been involved in numerous adventures and have been relaxing in various idyllic, paradise locations.
After leaving Kitwe two and a half weeks ago, we took a 40-hour bus trip to Nkhata Bay in the North of Malawi. We vowed that we would never do such a long stretch of travelling in one go again, but in this instance we were determined to reach the lake before Lance's birthday. Thankfully we did, and we were able to wake up in our bamboo hut to the sight of a crystal clear lake and a spectacular beach. For the first time in his twenty four years, Lance was able to lie on the beach soaking up the rays of the sun on his birthday, generating a mean suntan. 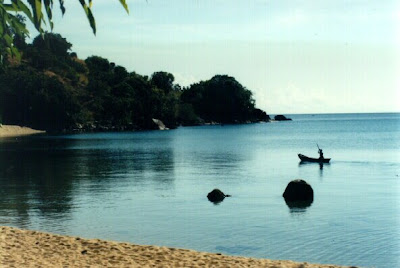 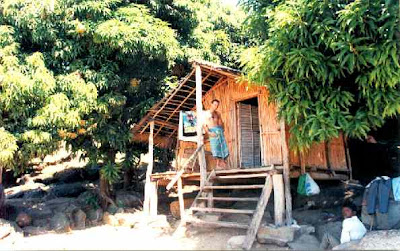 Lance enjoying a sunkissed birthday at Njaya Lodge, Nkhata Bay, Lake Malawi
After spending a couple of lazy days in Nkhata Bay, we took the iLala ferry across to Chizimulu Island in the middle of lake Malawi. It is a very small island - one can walk around it in less than three hours - that afforded us great opportunities to snorkel and relax in its peaceful island ambience. We also happened to befriend the chief who showed us around his territory. 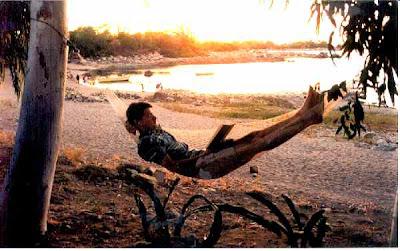 Lazy days, Chizimulu Island, Malawi
After three days there, we took a dhow trip across to the bigger island of Likoma. It was here that we met two interesting Britons who were busy running a backpackers lodge, and dreaming of a future luxury tourist resort. The lodge, appropriately named Kaya Mawa: ("maybe tomorrow"), was situated on a stunning, desolate beach overlooking turquoise water and captivating sunsets. After spending another two lazy days by the lake we decided to venture off and do what we came to do: hard-core travelling. 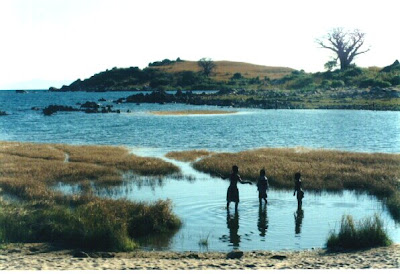 "Maybe tomorrow", Likoma Island, Malawi
It started off with a two hour dhow ride across to the small Mozambican town of Cobue. Upon arrival we realized that we would now have to contend with the added problem of Portuguese. The border official also warned us not to venture off as there were a number of live land mines in the area. We spent two days and a night in this town, which had virtually no food available and possesses poverty the likes of which we'd never seen before. Mozambique is after all, the world's poorest country.
On the second night we were able to secure a ride in a speedboat down South to the town of Metangula, about 70 kilometers away. This proved to be an exhilarating experience as the pilot had decided to travel at night with only darkness to keep us company. At high speeds we could feel the lake race away below us, getting wet occasionally by over-zealous waves. Although we were only able to make out the fine outline of the shore, there were tiny pricks of light penetrating the darkness which emanated from the fires of the locals who preciously guarded their day's catch of fish on the lake shore. This whole experience was of course enhanced by the sound of our walkmen reverberating in our ears. The trip took the entire night, as we stopped off at one of the lake-side fires to eat supper (samp and dried fish) and caught up on two hours sleep on a beach when cloud made it impossible to navigate.
The boat was very small and the captain, Mr Joseph, had decided to fill it up with a lot of passengers. Two of these passengers were a brother and sister team from Burundi who were making their way to Swaziland to seek political asylum. It had already taken them a month to make their way through Tanzania into Mozambique and what lies ahead for them is daunting. The four of us made breakfast together on the beach in Metangula after which we moved to the road where we had to wait six hours for the bus to Lichinga. This trip took us six hours, and saw us traverse some really treacherous roads. 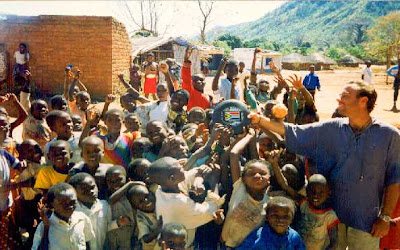 Lance using the frisbee to make friends and influence people, Metangula, Mozambique
We arrived in Lichinga at five in the evening and found all the hotels full. Undeterred we decided to walk around the town and ask the first Mzungu (white person) we saw for advice: Portuguese was proving an insurmountable barrier to our communicating with Mozambicans. Obviously our guides must be with us because the person we pounced upon turned out to be a South African, Annette Louw. She had apparently made the news back in South Africa over her epic solo journey to Lichinga and her wranglings with SACADA, the group of right-wing Afrikaners who migrated to Mozambique to farm unused land there. Apparently Lichinga was their base, and throughout the course of the night and the following day we came to meet various of its members, including the leader of the SA Freedom Front's brother, Dominee Braam Viljoen. Annette had become disillusioned with SACADA and throughout the evening related stories of various scandals surrounding them. She also allowed us to stay the night in her home where we were cared for with true South African hospitality.
The next morning we managed to hitch a ride on an old DAF truck down to Mandimba, a small Mozambican town, 6 hours away on a terrible road in rack and ruins from the war. At six the following morning we set off from Mandimba to Cuamba where we arrived at lunchtime after breaking down on the steadily deteriorating road. We spent the night there where a local befriended us and dished out beers freely. After a drunken day we then had to suffer the indignity of listening to the Boks losing the rugby test to the Lions.
The following morning at half past five we were off on a South African train to Nampula. This was the best form of transport we had encountered in Mozambique, and we arrived in Nampula on Sunday afternoon after a speedy journey through lush countryside bursting with fruits and vegetables. On Monday we were able to connect up with Lance's friends in World Vision here in Nampula, and they have graciously agreed to put us up for the week in style.
From Nampula we will be heading to Ilha De Mozambique and then up the coast to Zanzibar. This is largely unknown territory and we anticipate it taking us three to four weeks to traverse.
Lots of love
The African Wanderers
Lance and Dave
Posted by The African Wanderers at 9:39 AM No comments: