Hi Everyone
When we last wrote we were in Nampula, Mozambique on our way to the coast.
We hitched up with three Israelis in a camper land rover and head off to Ilha de Mozambique. This place is an enigmatic island that exudes a peculiar Portuguese/Arab/African ambience. The ancient buildings are really run down - damaged by the cyclone in '94. The giant fort dates all the way back to around 1550 and is quite something to behold.
We camped on the beach near Nacala a few hours north. The next day we headed back to the junction town of Namialo where we briefly parted ways with the Israelis. We headed north on a bus with a wide variety of characters including someone who summarily threw up next to Lance.
Arriving in Pemba we met another 2 Israelis (a total of 13 Israelis on the trip so far) and together we made our way to Wimbi Beach about 5kms out of town. At the Nautilus hotel we camped for free in, believe it or not, the children's playground! This proved to be a great meeting spot for backpackers, and as we have come to expect the three Israelis we left behind in Namialo managed to locate the 2 Israelis with us. We spent 4 days at Wimbi, basking on the pristine, coconut-lined beach enjoying the sun. Dave came down with Malaria, feeling pretty rotten for 2 days but it passed with no long lasting effects. 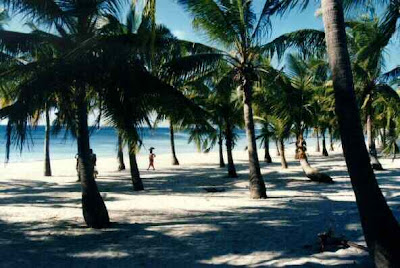 Wimbi Beach, Pemba, Mozambique
A group of about 11 of us left aboard a motorised boat for the splendid, undiscovered island of Ibo. This must be the most tranquil place on the face of the Earth. We spent five days here, camping in the grounds of an absent french woman's villa. The rest of the group went back to Pemba while we proceeded to discover the pleasures of the rest of the Northern Mozambiquan coast.
We took a sailing dhow north to Pangane stopping off at the Island of Matamu on the way. Matamu is what the lexicographer had in mind when he devised the term paradise: coconut trees, warm turquoise sea, long white beaches (we will ignore the local crapping on the beach nearby - an effective means of waste disposal which detracts slightly from the ambience). If we thought the beach at Matamu was good, the one at Pangane proved to be even better. 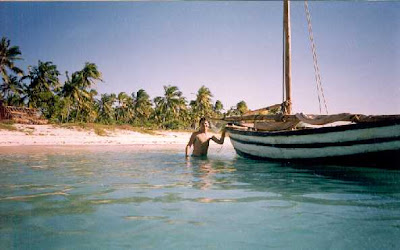 Dave attempting a Camel Man pose next to our dhow, Matamu Island, Mozambique
Pangane doesn't feature on any Michilan map, but on our route it certainly stands out. This part of Mozambique is very desolate with only the shop in Pangane stocking cigarettes, condensed milk and coke. Bread, fruit and other food had to be ferreted from surrounding houses. On the Saturday, we were privileged to witness the local soccer match which drew almost the entire village's population. Afterwards, we demonstrated the virtues of the SA frisbee drawing an equally large crowd as the soccer match did.
We decided to venture back onto the disastrous roads of Mozambique, after a misunderstanding occurred when negotiating the price of a dhow to Mocimboa de Praia. We travelled by bakkie and truck to Menengelewa, a small village in the middle of nowhere which we are convinced no other traveller has stayed at. After Dave's impressive display of culinary expertise in the form of a chicken stew in Mayonnaise and condensed milk sauce (mom, you would be so proud), we set off to find the source of the drumming that was echoing deep in the village. In the moonlight we came upon a group of young people beating a variety of percussion instruments. In addition to the drums there was also an old car's exhaust which the drummer was beating with a wrench to produce an extremely trance-like sound. The locals were using a range of trance inducing substances but we found it possible to achieve this state without them. Circling the drummers, about 50 people performed an intricate, synchronized dance that had us transfixed for about two hours. We slept in a local person's garden with the sounds of the music echoing throughout the night. We know this sounds awfully similar to our Pygmy experience in '94 but we promise that we're not making it up. These things just keep happening to us.
The next day brought with it an arduous and extremely painful truck journey to Mocimboa de Praia. From there we caught a dhow to the Tanzanian town of Mtwara. The journey took 2 days with the full moon to keep us company at night. The dhow was carrying about 5 tons of weevil infested maize and we spent much the day at war with these pesky creatures. Lance became a source of mirth for everyone on board when urinating proved to be an impossible dream. He was even reduced to having someone holding him over the side of the boat in his birthday suit trying desperately to overcome stagefright. 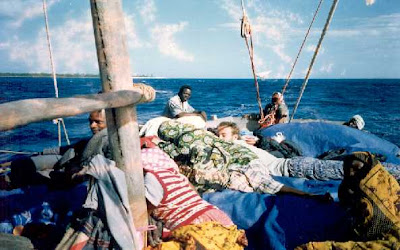 Lance relaxing before the Embarrassing Stagefright Incident, Mozambique
In Mtwara we were spellbound by another unique sight, a fully laden store. Lance discovered he had a mild case of Malaria, but fortunately it was only bad for one night. It seems that both of us can now pass ourselves as true African travellers.
From Mtwara we proceeded to Kilwa where we visited the 9th century Arab ruins. After much effort, we managed to firstly find their location and then got the council officer to issue us with permits on a Sunday!
From Kilwa we headed straight off to Dar Es Salaam where we are currently sitting behind a computer at the university.
We'll be heading to Mafia Island for 4 days and then on to Zanzibar, after that we will be going straight to Nairobi to secure our Ethiopian visas.
A message to all African Wanderer subscribers: if you fail to pay your subscription dues in the form of return letters informing us of your activities, then you will run the risk of having this service disconnected. So get typing.
Kwaheri rafikis
the African Wanderers
Dave & Lance
3 September 1997
Dear all
It seems that our subscription list has grown somewhat since last time. We wish to welcome all newcomers and would like to remind you of our conditions of subscription, namely that we must receive one email/month.
When we last wrote we were just about to depart for Mafia Island. The following day saw us leave by bus for a small junction town called Mkuranga but our bus went and broke down just 500m from the bus station, naturally a short trip became a 3 hour affair. The best was yet to come.
At Mkuranga we boarded the only available transport to the port village of Kisiju, which in this case was an extremely overloaded bakkie (for our international subscribers a "pickup"). Picture this: 30 people (excluding babies) with considerable luggage all crammed into a space that should realistically have contained ten. Add to this picture a sandy road filled with more than its fair share of bumps and potholes experienced in the comfort of our steel bar seat which never failed to elicit pangs of pain. Of course the locals had built up some kind of immunity to this pain and took great pleasure in observing our wincing faces at each approaching bump. After two and a half hours of this we finally arrived in Kisiju. Kisiju is a tiny village that serves as a port for the local fishermen and the dhow captains who transport goods to Mafia and its surrounding islands. It hardly ever sees any tourists, as the majority of them simply take the ferry or plane direct from Dar to Mafia.
We set up camp in a small forest next to the village which has proved to be the best camping spot so far. Our captain informed us that his dhow would be leaving before dawn the next morning at around 11 o'clock! This statement initially confused us until we realized that he was using swahili time (11 o'clock being 5am our time). After removing our shoes in accordance with local superstition we boarded the dhow and took off for Mafia Island and promptly beached on a sandbank about 500m out. It seems sailing isn't a precise science! We waited 5 hours for the tide to come in and free us, only to be greeted by bad winds. After "looking for another wind" (as our captain put it) for a few hours we decided that it was an impossible task and docked at the nearest island called Koma. It was here that we made our now famous chicken in mayonnaise and condensed milk sauce, a meal so spectacular that our muslim guest, Abdallah, declared "in my life I shall never forget this meal that I had on Koma Island with my two South African friends."(So much for all the derogatory remarks we've received regarding this recipe.)
The following morning we set off in earnest for Mafia. Thankfully the winds were on our side this time. As experienced as we have now become in dhow sailing, one thing which has proven itself time and again is that, as Abdallah stated, "we are merely guests of the wind". 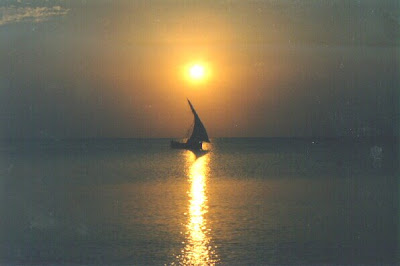 Sunset, Mafia Island, Tanzania
We landed at Mafia at lunch time and immediately booked ourselves into a local guest house. We then decided to imitate CNN and took in the Sights and Sounds of Mafia Island. This strangely titled island is slightly smaller than Zanzibar and is blessed with an even greater abundance of beauty. One thing that Mafia doesn't have an abundance of is tourists (we saw two in the whole week we were there) allowing us to truly immerse ourselves in the culture of the island's 10 000 inhabitants. The port town where we resided was called Kilindini which comprised a small market, a handful of shops, a tiny harbour and a stunning beach that stretched forever. We spent a week in this haven of tranquility before taking a grimy smelly and overloaded motorboat back to Kisiju (give us a dhow any day). 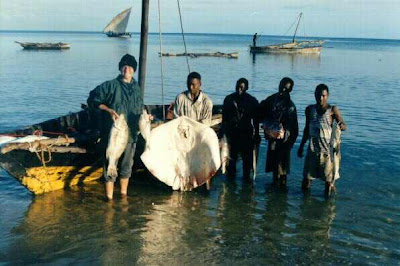