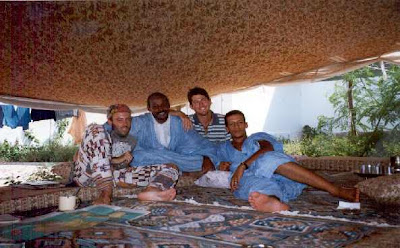 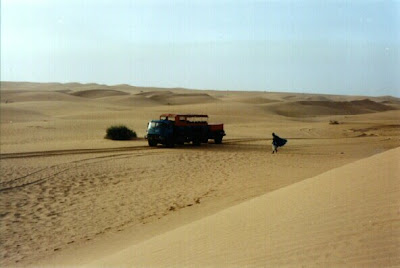 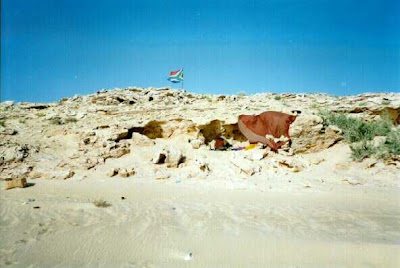 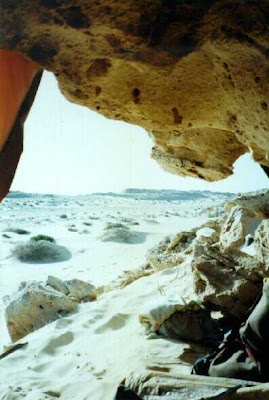 A cave with a view, No Man's Land
Things happened pretty quickly from there. After arriving in the first big town and sleeping the night there, a kind tourist agency organised a half price airplane ticket to Casablanca and within 24 hours of leaving the desert, Dave arrived in this fabulously exotic city.
In the meantime Lance was working his way North to Marakech on board the overland truck complete with all its typical complexities and personal intrigues amongst the various passengers. Hey we guess we gotta learn this whole social group dynamics deal again!
One day after arriving in Marakech the Wanderers were together again. Africans Unite!
Marakech was lovely, but it all seems so dreamlike now suffice to say that it was 3 days of African Wanderers-style partying. By this stage one would have thought all the hurdles had been crossed, but the fun was just starting.
Dave needed his visa extended by 4 days but his story had hit the SA newspapers and needless to say the Moroccans (Moerkaans) weren´t very enamoured with him. Another long story shortened sees Dave taking a week to deal with, threats ("we want to see nice things in the papers now!"), spies, secret palace (this is a kingdom) officials and a hard working SA Embassy staff in order to successfully get his visa extension.
The Wanderers met up in Fes again for a whole 7 hours before Lance had to head off on his mission. Here´s the deal: Dave had to be out of Morocco in 5 days. Unfortunately he only had a visa for 5 days to cross Europe but England won´t let him in unless Lance is able draw out $1000 in a country with a hard currency at $100 per day (the Credit Card limit) which equals 10 days. So Lance heads off to Gibraltar, a bizarre piece of England in the South of Spain, to start drawing the money. The travelling spirit kicked in one last time and miraculously the ATM just kept on spewing out money which allowed an early Wanderers re-unification in the Southern Spanish city of Algeciras (the first time Dave´s left Africa).
We started hitching with no success and eventually settled for an overnight bus to Madrid.
Europe´s weird, there are too many uptight whities, but the women....! So here we are in Madrid preparing to catch a 24 hour bus to London and complete the final stage of our journey of a life time, which started 17 months and 22 countries ago.
There will be one more e-mail in the African Wanderers series, so stay tuned for our nostalgic summation of the trip from London. In the meantime, would everyone who receives this e-mail directly or via friends please send us a one line note so that we can see how many subscribers travelled Africa with us.
Mayibuye Afrika!
from the proudly African, African Wanderers
Dave and Lance
Posted by The African Wanderers at 2:05 AM No comments: